The Vice Chancellor, Professor Rungano Zvobgo on Monday, 22 July 2019,  inaugurated the Executive Board of the Student Executive Council (EBSEC) with a directive to the new student executive to serve their term with integrity and honour. 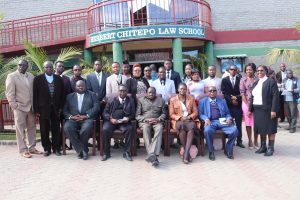 The new 14-member EBSEC, which is under the leadership of its president Takudzwa Ngadziore a Bachelor of Science Honours in Politics and Administration student, was inaugurated at a swearing-in ceremony held at the Herbert Chitepo Law School.

The inauguration of the new student leadership board  follows their successful bid for office in elections held to choose new members of the Executive Board of Student Executive in May this year.

Professor Zvobgo charged the newly inaugurated EBSEC board to run activities of the student Council in a most transparent manner in line with best practices and to desist from unethical conduct.

“The positions you have assumed are a ladder to greater things. They are a proper training ground for leadership,” said the Vice Chancellor.

He urged the new student executive to take the swearing-in ceremony seriously as it marked the beginning of duty for them. “Chisel yourselves out for greater things to come,” added the Vice Chancellor.

In response, president Ngadziore assured The University’s Management that the EBSEC members would ensure a harmonious working relationship with the University Management and all other stakeholders.

All EBSEC members took their oath of office and signed their Code of Conduct.

The full list of the new EBSEC members is as follows;