On Saturday, 23 November 2019, Great Zimbabwe University (GZU) law students, Kundiso Charmaine Rusike, MakomboreroMuropa and Ashley Muza did the nation and the University proud when they won the 2019 All Africa International Humanitarian Law competition, beating some of the top universities in Africa. The  competition was held in Arusha, Tanzania from 19-23 November 2019. 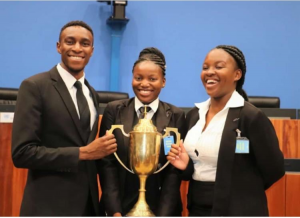 Law students, MakomboreroMuropa, Kundiso Charmaine Rusike and Ashley Muza did the University proud when they won the 2019 All Africa International Humanitarian Law Competitionheld in Arusha, Tanzania from 19-23 November 2019.

The All Africa International Humanitarian Law competition is a highly regarded Pan-African Moot Court competition which is open to participation by Law schools from all regions of the African continent. The competition is the largest gathering of law students, academics and judges around the theme of human rights in Africa. The annual continental showcase brings together all faculties in Africa, whose top students argue a hypothetical human rights case as if they were before the African Court on Human and People’s Rights. The competition seeks to prepare a new generation of lawyers to argue cases of alleged human rights violations before the African Court.

In order to represent Zimbabwe at the All Africa Moot Court Competitions in Tanzania, GZU beat Midlands State University, University of Zimbabwe and Zimbabwe Ezekiel Guti University in the 2019 Zimbabwe International Humanitarian Law Moot Court Competition held from 8 October to 11 October 2019 at the High Court in Harare before a panel of experts in international humanitarian law.High Court Judge, Honourable Justice Charewa presided over the national competition. In Arusha, the team fought its way to the final where it outwitted the University of Uyo from Nigeria to win the continental title.

The victory could not have been any more poetic. It comes at a time when Great Zimbabwe University has rolled out its first class of law graduates. At its 13th Graduation Ceremony held on Saturday, 2 November 2019, the Herbert Chitepo Law School presented to the nation, and indeed the world at large, its very first class of qualified lawyers.

As such, winning the 2019 All Africa International Humanitarian Law competitioncomes as confirmation that products of GZU law school are competent and ready to take on the world in every respect. In fact, this entire year has been one success story after the other for the GZU law school. In February, the law school astounded many as it took the runners up prize at the African regional rounds of the Price Media Law Moot Court Competition which was held in Johannesburg, South Africa, and qualified amongst the five universities from all over Africa that were selected to represent the continent at the international rounds of the competition in Oxford, England. In April, the law school again excelled and was placed 19th out of seven hundred law schools from all over the world at the Phillp C Jessup Moot Court Competition, and was the only team from Africa to make it into the revered top 32 ranking. In October, the GZU law school took first and third places at the regional Child Law Moot competition, in the best memorials and overall ranking categories, respectively, which was held in Pretoria, South Africa. With such outstanding exhibitions of excellence nationally, regionally and internationally, GZU law students are already poised to hit the ground running as they now enter the professional world.

Mr Nkiwane thanked the Great Zimbabwe University management, staff and students for the support that his School has been receiving from the University community.